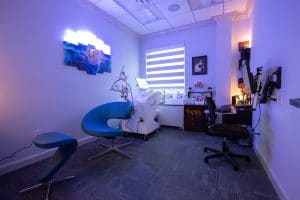 Many patients and doctors are unaware of transcranial magnetic stimulation (TMS) as a treatment for severe depression. A contributing factor to the lack of TMS’s prevalence in psychiatric treatment is the misconception that TMS is another painful form of electroconvulsive treatment (ECT). This image of brain stimulation therapies perpetuated in films is actually quite far from the reality of TMS, and is hindering many people with treatment resistant mood disorders from getting the help they need.

What TMS actually entails is a 20-40 minute procedure that administers electromagnetic pulses to the front of the head, where the prefrontal cortex of the brain is located. Treatment is conducted daily over the course of 6 weeks and occurs in-office while the patient is awake. Only a mildly uncomfortable tapping sensation is reported by some. And you do not need to suffer through upwards of ten ineffective medications; if remission of symptoms is not achieved after two antidepressants, TMS may be an option to consider. What’s more, TMS can be a great complement to behavioral activation therapy, as it has been shown to enhance behavioral treatments for depression.

TMS has also been approved to treat a number of disorders including OCD and PTSD, and research is ongoing to uncover how this novel therapy may help others suffering from treatment-resistant psychological disorders. While this therapy is still new, its non-invasive nature and lack of long-term side effects make it a safe treatment option for persistent psychological disorders.