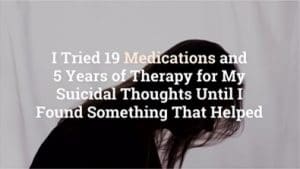 When I was 10 years old, my mother, who had never touched a cigarette, died of lung cancer. That was in 2008—the same year the financial crisis hit, costing my dad his job. For my brother, the grief kicked in immediately; I remember him crying every night for quite a while, right after my mom died. But for me, the sadness came slower—it wasn’t until high school, surrounded by other girls with moms to guide them through getting their periods and picking out prom dresses, that I became grief-stricken, almost unbearably so. It was then, at 15 years old, that I first thought about taking my own life.

The term for having those intrusive thoughts in the psychological community is suicidal ideation. They were triggered by the grief about my mother and my paralyzing depression, and some anxiety, mainly due to my new high school environment. It felt as though every negative thing that happened in my life—failing a test in school, having a fight with my dad—felt so overwhelmingly bad that suicide seemed like the only option. I constantly believed my family members, friends, and coworkers were bothered by my presence and that everyone would be better off if I weren’t around.

My suicidal thoughts—along with self-harm practices and crying myself to sleep each night—weren’t quelled by my therapy sessions or the first antidepressants my psychiatrists began prescribing. No interventions seemed to help stabilize my mood. At 16, I pursued a plan to try to end my life, the details of which I feel important not to make public.

Thankfully, I survived, and it was the first and only time I ever attempted suicide—but my suicidal thoughts never went away. In fact, they got much worse.

Despite my unrelenting depression, I went to college after high school, but I couldn’t have imagined the toll it would take on my mental health. In 2015, I was on campus at Northern Arizona University when a freshman student opened fire, killing one student and injuring three others. I was close enough to the incident to hear the gunshots, and two of my friends who witnessed the shooting firsthand died by suicide shortly after.

The severity of my depression took a turn after that. In addition to feeling like every obstacle or difficult situation was a reason to take my own life, a new level of anger emerged. Now, inconveniences resulted in violent outbursts and throwing things. On top of that, I was extremely isolated—my unstable emotions made it difficult for me to maintain friendships or romantic relationships, so I spent most of my time alone with these depressive, suicidal thoughts.

Years in therapy and countless medications were also seeming less and less likely to have a major impact. At age 20, I’d already tried 19 different medications—Zoloft, Prozac, Cymbalta; if you’ve seen a commercial for it, I’ve tried it—and had five years of psychotherapy under my belt. None of it helped; in some cases, it confused me about myself even more. I realized that my mind was in constant opposition to everything else around me—no advice from my therapist or brain chemistry-altering drug could rewire what was going on in my head.

RELATED: I’ll Never Hide the Truth About My Suicide Attempt From My Kids

It was because of this—my deep desire to keep trying to get help to no avail—that one of my providers deemed my depression as “treatment-resistant,” a severe type of depression that doesn’t respond to adequate treatment. It seemed like a hopeless diagnosis until that same provider who had been working with me from the beginning suggested a treatment called deep transcranial magnetic stimulation, or deep TMS, in 2018. I got on board with trying it as soon as my provider recommended it.

Deep TMS—a noninvasive procedure that uses magnetic fields to stimulate the brain’s nerve cells—had only been cleared by the US Food and Drug Administration (FDA) as an accepted treatment for treatment-resistant depression five years earlier, in 2013, and it’s specifically for patients who have tried multiple other treatments for depression with no success.

Unlike taking a daily medication, deep TMS requires patients to wear a helmet. The noninvasive procedure works by using magnetic fields to stimulate the nerve cells in the regions of the brain that are involved in mood control. The treatment itself felt like someone was tapping on my head with a pencil—that’s it. In the beginning, it felt fast and intense, but I got used to it after just a few days. Sessions were daily, lasting about 20 minutes each. The treatment was a huge time commitment, but at that point in my life—after years of failed interventions—I was more than willing to try anything. I’m so glad I did.

RELATED: What is Suicidal Ideation? The Dangerous Thought Pattern Is on the Rise Right Now—Here’s What You Need to Know

I can pinpoint the day when I first noticed a change: I was on day 15 of my deep TMS treatment and my car broke down. I was frustrated, of course, but to my surprise, my mood didn’t escalate past that. I didn’t become violent. I didn’t throw anything. I didn’t consider suicide an option. I just took a deep breath, called a tow truck, and found out how much the repair would cost—I handled it.

After 42 sessions of deep TMS, I was not only free of suicidal thoughts for the first time in a very long time, but I was also able to actually participate in life: I maintained friendships, I repaired my relationships with my father and step-mother, I even graduated from college and got a job in the tech industry.

Right now, I feel the best I’ve ever felt. But I know deep TMS didn’t magically cure me completely, and I’m not taking my mental health for granted. I still go to therapy regularly to continue to learn the tools and coping skills necessary to keep my depression at bay, and to recognize any signs that my grasp on reality and my moods might be slipping. I’ve also taken up more self-care practices: I routinely evaluate my feelings, I journal, and I plan for the future—something that I never would’ve dreamed of doing at my lowest points.

My recovery has also encouraged me to make set goals in life—one of which is to be more vocal about suicide prevention. It might sound cliché, but the sky actually did seem bluer after I received this treatment. My message to anyone—especially young people—with suicidal thoughts is this: Get help as soon as you can. Talk to your parents, and if you can’t talk to them, talk to a mental health professional. Call a suicide prevention line. Suicidal ideation can be a day-in and day-out battle, but you can get through it. There’s always help available when you need it, and no situation is hopeless.